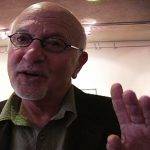 As the arrests of non-violent wireless meter protesters grow, and as Santa Cruz County follows Marin County in criminalizing further installation by PG&E of its so-called ‘smart’ wireless meters, the monopoly power utility is claiming that its authority trumps that of local county and municipal jurisdictions.

Guest Blog – by Frank Egger
Former Fairfax Mayor Frank Egger, led his city’s local challenge to corporate assertions of power through a record-setting number of terms. He worked with the current mayor, Larry Bragman to craft the Fairfax’s pioneering ordinance declaring a moraturium on wireless meter installation which laid the foundation for the county-level bans.

He sees a state-wide anti-wireless meter movement growing that policy makers would be unwise to underestimate. In what follows, Former Mayor Egger presents his views on the rights of citizens and local governments in the face of corporate overreach.

CAN WE ENFORCE SMARTMETER MORATORIUMS?
Congratulations and great work at both the Marin County Board of Supervisors meeting Tues (12/14/10) and the Santa Cruz BOS (1/11/11). These are legal, binding and enforceable ordinances, not just some symbolic gesture. Print out the Marin County, Santa Cruz County, Watsonville or the Fairfax SM moratorium ordinance to have on hand.

If you live in one of the other incorporated cities/towns in Marin or Santa Cruz, ask your mayor or councilmembers to agendize and hold hearings on a SmartMeter Moratorium Ordinance for your community.

As soon as Marin passed the ordinance, PG&E’s PR people immediately put the spin on saying they will continue to install and they will not abide by the county’s ordinance, the CPUC is the only authority that can control PG&E.

PG&E thinks they can pick and choose what city or county ordinances they will abide by.

The law is on our side and its time to give PG&E the facts:

1. California cities (480) and counties (58) have the right to protect the health, safety and welfare of their residents, period. PG&E touts this pre-emption line but cities and counties are legal jurisdictions with constitutional rights. Courts have not ruled on this claim of CPUC pre-emption.

The last successful legal challenge to state pesticide laws and the states ability to pre-empt a local ordinance was in 1984 in Mendocino County. A ban on aerial pesticide spraying, an ordinance adopted by initiative by the voters of Mendocino County over the objections of the then Attorney General, George Deukmejian, was upheld by the California Supreme Court in a very well reasoned opinion. The CA Supreme Court said cities and counties have the right to protect the health, safety and welfare of its citizens. Subsequently the state, under pressure from the pesticide industry and certain legislators, passed legislation overturning that Supreme Court decision. By time the legislation passed George Deukmejian had been elected governor and he signed the pre-emption bill.

2. Every city and county has an approved Franchise Agreement with PG&E. Fairfax’s first franchise agreement with PG&E, allowing them to operate in Town, was a 1938 ordinance, #64, and it was amended by ordinance #156 in 1954. Check with your city or county clerk and ask for a copy of their PG&E Franchise Agreement. This is just one of supporting documents that gives your city or county some control over PG&E separate from the California Public Utilities Commission.

3. If your city or county has a Telecommunications Ordinance that governs antennae and either wireless or wired transmitters in your community, they have another legal means of authority over PG&E.

4. The California Public Utility Commission has no right to order you to accept the installation of a device on your property that may cause you harm or cause you to lose substantial property value either because you can’t live in your home or can’t rent your property out. This may be a “taking” under the constitution and subject the CPUC to an inverse condemnation lawsuit. Ask your attorney for advice.

Should PG&E or one of their contractors come onto your property (and you live in either Fairfax or unincorporated Marin County or any other city or county with a SM moratorium) to install a SmartMeter against your wishes, confront them, show them the ordinance if you have one handy (not necessary) and ask them to leave your property. Should they refuse to leave, call 911, tell the dispatch center you have an uninvited person on your property trying to do something you don’t want done and they are violating the Fairfax or Marin or whatever city or county moratorium ordinance on SmartMeters.

Ask that a police officer (city) or sheriff’s deputy (county) respond immediately as someone is trespassing on your property, they are there without your permission you are concerned there may be a 415 physical (an altercation involving physical contact) about to occur on your property and you need protection.

When the officer or deputy arrives, ask that the installer be cited under the local ordinance and advise that you will also sign a citizens’ arrest complaint for trespassing if the installer does not immediately leave your property.

Our police officers and sheriffs’ deputies are here for our protection too, not just PG&E or their contractors who probably do not have the right to be on your property without your permission in the first place. PG&E does have a right to come in and READ your meter.

PG&E claims that the deed to your property gives them an easement and the right to come on your property to do anything associated with gas or electricity. Find your deed and read it. Once you have read and understand what it says, contact your attorney and ask for her/his legal opinion.

Motion detector outdoor lighting can be effected by SmartMeters and keep turning your lights on every time a SmartMeter transmits. See article PG&E replaces Corte Madera resident’s SmartMeter after complaints

For a free PDF copy of the just released report by Cindy Sage and Associates on how so-called ‘smart’ meters can violate even the lax FCC radio-frequency exposure guidlines go to SageReports.com

Please remember, your bite-size contributions on our Donate Page are what help keep us going

This entry was posted in Uncategorized. Bookmark the permalink.