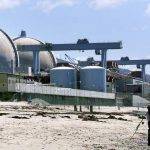 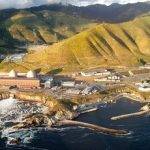 Above – California’s own timebomb nukes: San Onofre (left) and Diablo Canyon (right), both on the ocean, both near earthquake faults. Diablo is at the end of its licensed life, but PG&E – of Prop 16, wireless so-called ‘smart’ meters and San Bruno fire fame – wants to extend the licensed operation at least 20 years. Any questions?
[ Blakeslee puts PG&E on hot seat about Diablo Canyon & Nukes Have Needs, Big Ones – Megan Matson – Mainstreet Moms ]

Between Catastrophizing and Denial Falls What’s-Really-What – Editors’ Introduction
As nuclear-renaissance- friendly government agencies and industry spin-meisters clog the cybersphere with disinformation and ‘no-immediate-danger’ denials, and Cassandras of the right and left promulgate their doomsday prognostications, in this edition of the Digest we aim to give you the resources to sort out What’s-Really-What for yourselves. To set the standard, we begin with this excerpt from the authoritative 1991 book by Jay M. Gould and Benjamin A. Goldman, DEADLY DECEIT: Low-Level Radiation – High Level Cover-Up:

“A Startling Discovery…
…That radiation from the April 26, 1986 Chernobyl disaster, which reached the U.S. early in May of 1986, was followed almost immediately by an extraordinary force of mortality, amounting to perhaps 40,000 excess deaths in the summer months, especially in the month of May. The acceleration in deaths particularly affected the very young, the very old, and those suffering from infectious disease such as AIDS, suggesting that the ingestion of Chernobyl fission products had an immediate adverse impact on those with vulnerable immune systems….

“One striking number should be mentioned here: The statistical probability is less than one in one million that during the summer following the Chernobyl accident the excess deaths observed in the U.Sl were due to chance. Equally improbable were the excess deaths observed in West Germany during the same time period. and…ornithologist David DeSante found at the same time that the number of newly-hatched land birds counted by the point Reyes Bird Observatory in California in the late spring and summer of 1986 dropped 62 percent below the average of the preceding decade. [ For our in depth interview with Dr. DeSante, and downloads of his study and updated commentary, click here. ]

Yes, there are significant differences between Chernobyl and Fukushima, but when you hear Barack Obama parroting the industry line like this, “I want to be very clear. We do not expect harmful levels of radiation to reach the United States, whether it’s the West Coast, Hawaii, Alaska or U.S. territories in the Pacific,” please take it with several grains of (iodized) salt.

Fallout Monitoring and Mapping
IVAN Monitoring
A network of volunteer community members monitoring for radiation in the Western United States…
How to Participate in the Nationwide Radiation Network: If you want to join this nationwide grass roots effort to monitor the radiation in our environment, …
International Citizens Radiation Monitoring Network
Fallout Monitoring and Mapping
THE LOW LEVEL RADIATION CAMPAIGN
…”In the USA radiation has reportedly been detected, but the consistent official response is reassuring. However, Environmental Protection Agency monitoring data has vanished from the web. In Canada there remains no official public statement about the risk to Canadians of inhaling the contaminants. Official advice about At what dose might health effects occur? is bland and misleading. The real answer is that no dose is safe, and Plutonium and Uranium are very dangerous if inhaled or ingested, even though assessed “doses” might be very low. At present we have no way of knowing whether these elements are reaching the west coast of the Americas….”

Action Organizing
Nukes Have Needs, Big Ones – Megan Matson – Mainstreet Moms
Letterman: “Take Indian Point Apart” – Michio Kaku
=====
Please remember, your bite-size contributions on our Donate Page are what help keep us going. You can also send a check made out to EON to EON, POB 1047, Bolinas, CA